The agricultural sector accounts for almost 10% of greenhouse gas emissions in the EU, mainly for food production and transport. While there is an enormous potential to produce renewable energy on farms due to the availability of wind, sun, biomass and agricultural waste, important barriers and challenges still remain. 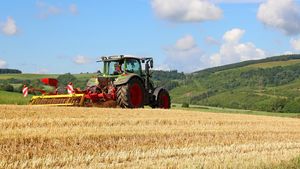 Recent studies have proven that the main barriers identified by farmers to produce renewable energy are:

Subsidies and feed-in tariffs are a key factor in encouraging farmers to shift towards a more environmentally friendly production and use of energy.

The EU’s rural development policy helps the rural areas meet economic, environmental and social challenges, and it shares objectives with other ESIF funds. MS and regions draw up their rural development programmes based on the needs of their territories, and addressing some of the common EU priorities. At least 30% of funding for each RDP must be dedicated to measures relevant for the environment and climate change.

The main objective is to develop measures that encourage the production and use of RE in the agricultural and rural sector. AgroREs will support this sector by solving its energy needs in a sustainable, economic viable and socially responsible way. 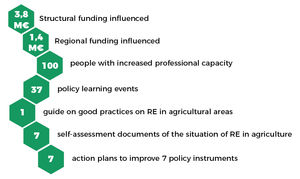 What will this project change?

OE 4.2.2 aims to increase the participation or RES in thermal uses, specially biomass and solar, in companies.

These PIs presents several axes of intervention included in the OP in relation to AGRORES:

- Promotion of RES for heating in companies

Actions described in the OE 4.2.2 focus on the integration of RES technologies in companies. However, until now the major investment has been for SME-building related sector, with low representation of any other sector.

From 2014 to 2017 grants calls were launched for energy audits, and EE investment, while in 2017 DG Energy launched a call for RES application in companies, which included industry and agrocompanies. However, the applications received were unbalanced, with very few applications coming from the agriculture sector.

The calls have to be reviewed, analyzing the specific support which requires the agricultural companies. A full analysis of current support schemes and required investment must be done by potential agriculture users and RES technology.

The result has to be a tailor-made support per agriculture sector and Res technology.

On the other hand, a monitoring system to control the achieved impact is also required.

• TO5 - Climate change and risk prevention

• TO6 - Environment and resource efficiency

• TO7 - Transport and energy networks

Every thematic include actions capable to fud RES integration in fields such as buildings, enterprises, industry or agriculture.

The policy of the Lubelskie Voivodeship in the field of energy efficiency improvement and the use of RES is currently focused on supporting activities aimed at achieving the 3x20 goals. As part of the ROP LV, the following are supported: projects concerning the construction of installations for the production of energy from renewable sources in small and medium-sized enterprises operating in the region.

However, these values are based on RES electricity plants thanks to national supporting schemes, while the promotion of small installations in companies will only afford a small part of this production. The agriculture and the promotion of RES in all its production chain is largely under supported and rquires specific revision.

On 14 July 2004 DCC signed up to the Nottingham Declaration on Climate Change. The declaration requires councils to develop an action plan to tackle climate change hand-in-hand with local communities. By signing the agreement, we have committed ourselves to working with central government to contribute, at a local level, to deliver the UK Climate Change Programme.

One action plan is the authority’s Energy Policy which has a renewable energy objective of achieving 30% of energy to come from renewable sources for the corporate estate. The strategy also commits DCC to assist in the implementation of measures to reduce the regions emissions of greenhouse gases.

The policy needs to better reflect the move to a subsidy free renewables environment and the creation of new, multi-vector renewable energy systems as well as contractural arrangements which increase the profitability of renewables and therefore enable investment from public, private and community sectors

North Karelia aims to be fossil oil free region by 2030 and it is the first region in Finland to apply for a membership in Carbon Neutral Municipalities HINKU-network. Nine out of thirteen municipalities in North Karelia has committed to reduce greenhouse gas emissions by 80 % until 2030 inside the municipalities borders. Achieving these ambitious targets is relying especially on this sector.

Regional Climate and Energy Programme is concentrating on energy production and to transport. Roadmap has pointed out that for example electric and biogas machinery will replace combustion engines. The Action Plan for Oil-Free Machinery and Agriculture will be created in this project and it will define the concrete steps to implement the regional energy and climate targets in this sector.

The ROP 2014-2020 is a national programme but with regional allocation for all priority axis, so this context relates to both national and regional level.

Priority Axis 3: "Support for transition to a low carbon economy".

Investment Priority 3.2: Promotion of the carbon dioxide emissions reduction strategies for all types of territory, particularly urban areas and detaliation as activity to fulfill the Specific Objective 3.2: Other investments for carbon dioxide reduction.

REASONS WHY IT SHOULD BE IMPROVED

The policy instrument needs to be improved by defining concrete strands of activity and supporting specific initiatives which will help SMEs (and SMEs within specific agricultural and rural sectors) to harness opportunities linked to the low carbon economy, more precisely investmnets in renewable energies.

The policy instrument addressed by the project belongs to the AXIS 4 of the Regional Operational Programme for LAZIO 2014-2020. This axis aims at supporting energy efficiency, intelligent energy management and the use of renewable energy in buildings, infrastructures and different sectors, decreasing polluting emissions.

European Agricultural Fund for Rural Development (EAFRD) through its Focus Area 5C aims at supporting and promoting the procurement and use of renewable energy sources, by-products, waste materials and residues and other non-food raw materials for the purpose of bio-economy.

In the national panorama, the agricultural sector accounts for 6,7% of greenhouse gas emissions and is responsible for 40% of methane emissions and 49% of nitrous oxide. The public resources allocated to the Focus Area 5C amount to 34,58 M euro (EAFRD 14,9 M euro) for a total investment in the production of renewable energy (T16 indicator) equal to 63,55 M euro (4% of the RDP resources).

REASONS WHY IT SHOULD BE IMPROVED

The project can help produce new political and rural development planning instruments, and to facilitate the integration of funds deriving from the ROP LAZIO ERDF - Priority Axis 4 and EAFRD Focus area 5C in order to reduce dependence on fossil fuels and emissions in agriculture in line with the objectives set by the European Community.

Border, Midland and Western Regional Operational Programme 2014-2020 Priority3: SME Competitiveness Thematic Objective 3, namely to promote entrepreneurship, including high growth and potentially high growth sectors, facilitating the economic exploitation of new ideas and fostering the creation of new firms, (Investment Priority3(a); and to support the capacity of SMEs to grow in regional, national and international markets, and to engage in innovation processes (Investment Priority3(d)). Such supports will also promote green jobs and eco-innovation. Priority4: Low Carbon Economy “…This will be achieved through an increased use of renewable energy, development of green technologies and a modernised transport sector, and promotion of energy efficiency.” “…Ireland’s per capita aggregate GHG emissions are the second highest in the EU, its CO2 emissions per capita are the 10th highest. This reflects the fact that non-CO2 GHGs, mainly methane and nitrous oxide from agriculture, make up a significant proportion of total emissions in Ireland.”

TO3 - Enhancing the competitiveness of small and medium-sized enterprises, the agricultural sector (for the EAFRD) and the fisheries and aquaculture sector (for the EMFF), with a total fund allocation 58M€

TO4 - Supporting the Shift Towards a Low Carbon Economy in all sectors, with a total fund allocation 36M€

These objectives and priorities present several cross cutting opportunities in the OP in relation to AgroRES:

• Promote an agri-market for RE deployment as a driver for green jobs.

Priority 4 recognizes the impact of the agri-sector on GHG emissions. Priority 3 promotes entrepreneurship and innovation in SMEs (including agriculture). However, some key innovation enabling supports remain inaccessible to the agriculture sector in line with EU State Aid guidelines.

AgroRES seeks to reduce barriers to the opportunities for the agri-sector in both reducing its own climate impact and supporting a regional low-carbon economy. Agriculture in Ireland can be characterized by tradition, which requires encouragement and confidence to diversify. The RE potential in the agri-sector requires a significantly higher profile.

As a key deliverable of the AgroRES project the Institute of technology, Sligo (IT Sligo) has completed a regional self-assessment of the situation in the North...

The Bucharest Ilfov Regional Development Agency organized an online meeting with members of the regional stakeholders’ group in order to discuss the final con...

The Energy Agency of Extremadura, AGENEX, held its 5th Local Stakeholder meeting, in a virtual format, with its Managing Authority on 14 March 2022. This new me...

AgroRES stakeholders met in North Karelia on 27 January and 28 February 2022. Regional AgroRES action plan was the main topic of both meetings. The action plan ...

As part of the AgroRES project, Devon County Council commissioned a Regional Self-Assessment looking into the county’s socio-economic framework, amount and gr...

AgroRES partners held an online Steering Committee meeting on 3 February 2022. In this meeting, the progress review and the work plan for semester 6 (02/2022-07...

The study visits of the second Interregional Event to Finland took place 30.11.-1.12.2021. The interregional learning process in AgroRES project was enhanced by

The exchange of experiences is the key factor in the learning process of AgroRES. This intense work of identifying and sharing best practices through permanent ...