On 15 and 16 September, the first workshop of the SMART-MR project took place at the Town Hall in Ljubljana, organised by ZRC SAZU (Anton Melik Geographic Institute of the Scientific Research Centre of the Slovenian Academy of Sciences and Arts) and the Regional Development Agency of the Ljubljana Urban Region under the title »Participatory transport planning«.

At the first of the project's seven workshops at which over 50 participants from eight metropolitan regions – Oslo and Akershus (Norway), Gothenburg (Sweden), Helsinki (Finland), Budapest (Hungary), Rome (Italy), Porto (Portugal), Barcelona (Spain) and Ljubljana (Slovenia) – took part, two main topics were highlighted, namely, who to involve in transport planning and how. The participants exchanged their experiences as well as good and bad practices from their metropolitan regions. At the beginning, the discussion revolved around the pros and cons of public participation in transport planning, and around the issues of over-involvement, whether the public participation slows the planning process down, whom to involve, how to include relevant decision makers and marginal groups, and who can expedite the participation process.

Participatory planning helps to overcome the shortage of the top-down traditional planning. Participatory approach in which it is important that planners begin working with participants from the very beginning, helps to shape (or ‘co-design’) the plan in line with their – the participants' – needs. Successful management of the participation process enables to achieve many goals: ironing out differences between different perspectives, preventing unproductive competition, shaping solutions acceptable to all social groups, ensuring the participation and motivation of local actors, participants’ identification with decisions that concern their environment, and strengthening their creativity and recognition. Participation also has its disadvantages, especially because of its duration and financial demands. It is, however, not enough to simply invite regional actors to participate. It is necessary to take their opinions into account and to put them into practice.

The representatives of Oslo Reidun Stubbe and Akershus Liv Maren Bjørnstad described how a fee for entering the city was introduced for those who only commuted to the city to work, but lived in the district of Akershus surrounding Oslo. The initial aim of the city entrance toll was to collect funds to finance the region's motorway network whilst 20 per cent of the resources collected were invested in public transport infrastructure. The well thought-out inclusion of the public and political consensus managed to assert a measure that had seemed doomed to failure; henceforth, it is agreed the resources thus collected are to be shared between Oslo and Akershus. The collected funds enabled them to build a modern and efficient transport system, reduce traffic congestion in the city centre and increase the use of electric vehicles which are exempt from the toll.

In Gothenburg, they were not as good at it. Their bad practice of not involving the public was presented by Per Kristersson. The public’s insufficient participation in the starting period of introducing the congestion charge caused resistance. Following long-lasting negotiations on the local, regional and state levels, a compromise was reached, creating an exemption from paying the charge for locals residing in the vicinity of the payment point which they pass as part of their daily errands.

The representatives of Rome, Helsinki and Porto, Francesco Filippi, Mette Granberg and Avelino Oliveira, presented their innovative participation tools. The workshop participants were particularly interested in the experiences of implementing the participatory process. What kind of knowledge is needed, how to most efficiently involve the public and, above all, how to include their suggestions in the planning.

The workshop also included a study tour to Ljubljana’s city centre (site visit) in order for the participants to become acquainted with the transport policy, the process of motor traffic limitation in the city centre and on Slovenska Street, reconstruction of Eipprova Street, the self-service bike rental system Bicikelj, free electric vehicles Cavaliers as well as the ‘car sharing’ system. They then took a ride on a city bus to visit the P+R site at Dolgi most.

On Friday 16 September, the participants were also paid a visit by Violeta Bulc, the EU Commissioner for Transport. She did not hide her enthusiasm for the fresh and innovative approaches to transport planning.

SMART-MR project has reached its terminal station! You can read the results and the policy recommendations from the newsletter Library | Interreg Europe

The SMART-MR project has been prolonged until 30 September 2021. The partners from seven metropolitan regions continue knowledge sharing.

The SMART-MR addresses the importance of urban station communities and creates joint guidelines for developing them.

Listen what experts have to say on how to solve mobility challenges in European metropolitan regions. What needs to be done?

How to create smart mobility in metropolitan regions? The project results from the first stage are presented and discussed in the SMART-MR Political meeting.

Mobility challenges in urban and metropolitan areas are discussed in Barcelona (Spain) the 12th and 13th of November. 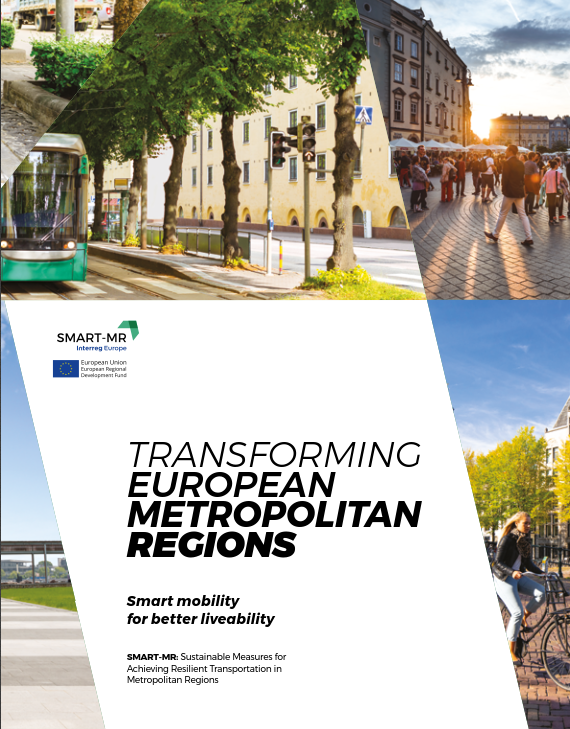 The publication gives you the main lessons learned during the seven SMART-MR workshops.